An ever-changing collection of random thoughts from my mid-Atlantic island. Grab a seat and stay awhile. It's fun over here. 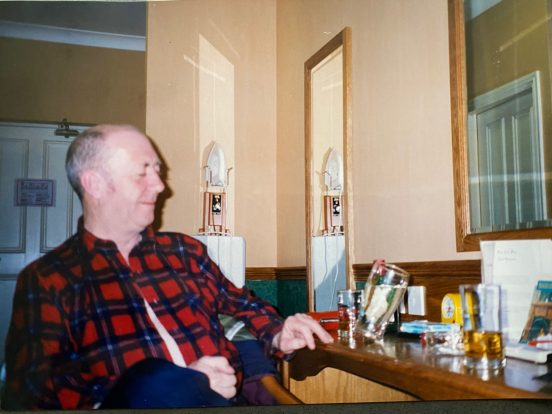 In honor of St. Patrick’s Day, I’d like to share my very first story I published as a budding travel writer. I wrote it in 1999, following my first real independent adventure. Back then I was studying abroad at the University of London—what was a glorious six-month hiatus from my days at the University of Maryland at College Park. It was March and I had spring break in my sights, so I packed my rucksack with nothing more than a handful of clothes, a sleeping bag and tent plus a loaf of bread with a jar each of peanut butter and jelly. I was headed to Ireland and my plan was to hitchhike around the country for eighteen days.

As with most good stories, this one wrote itself: After landing in Dublin and sleeping in the broom closet of a Temple Bar youth hostel, I was wandering the streets the next morning searching for that day’s adventure. Again, it was March, so the air was damp and there was a distinct Irish chill in the air. This was pre-Internet, so I relied heavily upon guidebooks to get around, so with my nose buried in my Rick Steves Ireland, I bumped into a curious man who wanted to get talking right away. His name was Al Muldoon (pictured above), a fact I would learn almost immediately after the kind gent asked me for the time.

Upon recognizing my American accent, Al started regaling me with travel tales of his own—most notably to places like San Francisco where he recently visited. We got along so well, in fact, that he invited me to have a pint of Guinness at his favorite pub just down the street, so I happily obliged. It was there where he made me an offer I couldn’t refuse. Turns out, Al was a trucker who delivered medical supplies across Ireland; if I could help him unload his truck, he would pay for my food, drinks and accommodations and give me a lift halfway across the country. As a 21-year-old backpacker with just a handful of bills in my pocket, I couldn’t possible say no, so the next morning I met Al in Dublin city center where I hopped aboard his truck and hit the road.

It was glorious start to my Great Irish Adventure. For days we drove past rolling green hills and wide-open pastures, all while listening to the sounds of the Dubliners and smoking Carrol’s brand cigarettes. We first dropped off packages in Cashel, a small town in County Tipperary known mostly for its medieval, 15th-century castle called the Rock of Cashel. We headed west to Cork where I kissed the Blarney Stone, then onward we drove to Tralee, home of the annual Rose of Tralee Festival—a beauty pageant when a young Irish woman is deemed to match the attributes of the famed folk song (i.e. lovely and fair).

It was here where things started to unfold with Al. That day was his forty-seventh birthday so he decided to take us both out in grand fashion. After hearty bowls of stew, pints of Guinness and multiple drams of Irish whiskey, we retreated back to the inn where he put us up for the night. Back in the room Al pulled out an old Christmas card. It was from his friends who he visited in San Francisco—one of those musical cards, but instead of opening it up to hear the tune, it had a button inside that said, “Push to Play.” But here’s the thing: Al didn’t know that, because at 47-years-old he didn’t know how to read.

In fact, it was the reason why he asked me to join him in the first place. Because of his illiteracy, he needed me to read the dockets to determine where the medical supplies had to be delivered. I was shocked and befuddled, but at the same time determined to open his eyes to a world that he’d been missing all his life—so I read him the Christmas wishes his California friends scribbled on the card and attempted to teach him the alphabet. I used words he knew—G was for Guinness, I was for Ireland, J was for Jameson—and went through each letter to help this man who had only been nice to me for the past five days.

The next morning Al had to head back to Dublin to pick up more supplies and I was eager to get to the Dingle Peninsula, an Irish Gaeltacht I’d been dreaming of ever since I bought that Rick Steves guidebook—and so it was there where we parted ways. To this day I still think of Al and wonder if he ever did learn how to read, but it’s indelible moments like these—bits of time spent around the world that I must say I’m very much missing these days thanks to the pandemic—that make me proud to say that I’m a travel writer.

The Staten Island Advance paid me a whopping $30 for that story, a fact I know since I still have a copy of the check that my father deposited into my bank account. On it he wrote, “Your first published story! I’m so proud of you. Keep up the good work!” That was a big day for me, and one that’s been followed by two decades of stories and adventures that I’m still living today here in Bermuda. It’s been a good run, but as I’ve learned, there’s always more on the horizon if you just keep looking.

So Al, if you’re reading this—and I really hope that you can—happy St. Patrick’s Day my friend. And to all of you aspiring travel writers out there, never stop exploring and don’t ever give up. A good story is always just around the corner.

TO READ THE ORIGINAL STORY PUBLISHED IN THE STATEN ISLAND ADVANCE IN JULY 1999, CLICK HERE.