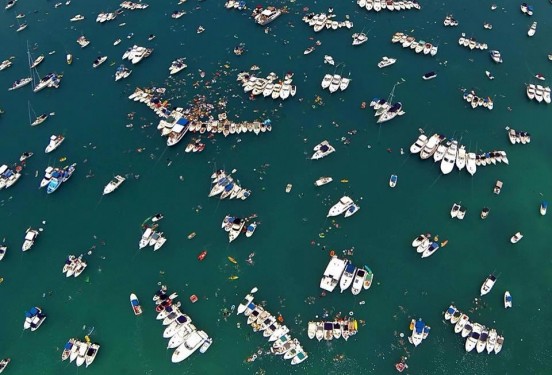 I’m a pretty lucky guy. For 365 days of the year I get to live on a tropical island in the middle of the Atlantic—one that’s lined with pink sand beaches, world-class dive sites and some of the friendliest people I’ve come to know. Even better, it’s a two-hour flight from most east coast gateways, which means in the time it takes to watch one feature length film you could be basking on Bermuda’s shores via flights from New York, Boston, D.C., Baltimore, Philly, Miami and Atlanta. And while this is one fact that I’m particularly boastful of, there’s one aspect of island life that I’ll never stop gloating about: We islanders like to party.

Don’t believe me? Just check out that photo. That’s an aerial shot taken high above Mangrove Bay from this weekend’s Non Mariners Race near Watford Bridge in Sandys Parish. Now, before you go asking what a Non Mariners Race is, just take a few moments and give that picture a good long look. Still not sure what it is? Let me help clear up any confusion: That’s the Mother of All Flotillas, a.k.a. The Biggest Floating Fiesta You Could Possibly Imagine. And it happens every year, the first Sunday of every August, right here in beautiful Bermuda. Think folks are sipping on Rum Swizzle in that picture? You better believe it buddy.

It’s an island tradition that’s over 40 years in the making. According to local lore, the event started after a group of drunken friends debated whether a baby carriage could be used to sail across Hamilton Harbor. They took their debate to the water—and while the carriage, which was outfitted with flotation devices to make it seaworthy—eventually sank to the bottom of the ocean, what was born that day was the wacky Bermudian tradition known as the Non Mariners Race. To this day islanders still set sail on “boats” that have no worldly business being on the water, but what’s even better are the crowds who turn up to watch.

And so the Giant Floating Party was born: Folks on boats, folks on noodles, folks on noodle-boats, you name it, all drinking copious amounts of alcohol in the blazing sun in the good name of island fun. I don’t know about you, but that sure sounds like a good time to me. And just think, if you’ve missed out on this year’s festivities, all you have to do is plan ahead and hop on one of those two-hour flights to our pink sand shores—because getting to paradise couldn’t possibly be easier.

One Response To  “Another Day in Paradise”